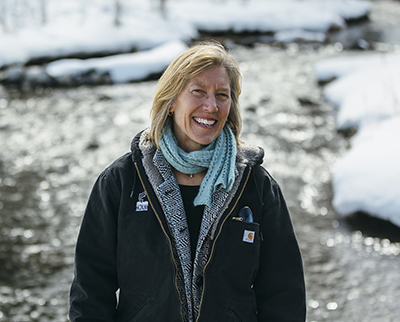 Nationally, as TU’s Senior Counsel and Water Policy Advisor, she helped pass new federal legislation to promote watershed restoration, including:  new watershed restoration authorities in the 2008, 2014, and 2018 Farm Bills; in the 2014 Water Resources and Reform Development Act; in the 2020 amendments to the Bureau of Reclamation’s WaterSMART authority; and in the 2021 Infrastructure Investment and Jobs Act.  In addition to working on federal agency implementation of the new statutory authorities, other work of national significance included preparing agency comments and litigation regarding the scope of agency rule-making on the jurisdiction of the Clean Water Act defining “waters of the United States.”

Before joining Trout Unlimited, Laura had been practicing public-interest environmental law as an attorney with the Sierra Club Legal Defense Fund (now Earthjustice) out of Seattle, Washington and later in Bozeman, Montana.  With the Legal Defense Fund, Laura litigated a variety of public lands issues, including changing timber management practices around northern spotted owl habitat and challenging fragmentation of grizzly bear habitat. Successful water litigation included challenging the dioxin discharges of pulp and paper industrial facilities and weighing in on water transfers that violated state law and served rapid development at the expense of fish and wildlife.  Also in Washington state, Laura successfully challenged the grant of groundwater pumping permits which harmed flows in nearby streams and rivers.

Laura’s international legal work has focused on the intersection between human rights violations and environmental degradation. Working during a decades-long civil war in Sri Lanka for the country’s only environmental non-governmental organization, she worked to preserve natural forests and public access for fuelwood in the face of an international effort to privatize the forests and export raw logs. Because a majority of the rural population depended on fuelwood to make their food, conservation and access to natural forests was just as vital to livelihoods as the press of civil war. Later, working Of Counsel to the Tibetan-Government-In-Exile in Northern India, Laura focused on the link between environmental and human rights on a project of the U.N. Human Rights Commission, spotlighting first-hand accounts of how environmental degradation deprived people of fundamental human rights to life, health and culture. These experiences helped cement Laura’s life-long commitment to equity, diversity, dignity, and inclusion as fundamental and inviolate.

Laura enjoys an avocation of mountaineering as a complement to her legal work. She  was a Climbing Ranger for the National Park Service in the North Cascades and Denali National Parks, a member of the 1995 American Everest Expedition via the North Ridge, and staffed the remote, high-altitude clinic in the Khumbu region of Nepal for the Himalayan Rescue Association.  She considers teaching her two daughters to climb and ski her most rewarding mountain experience.